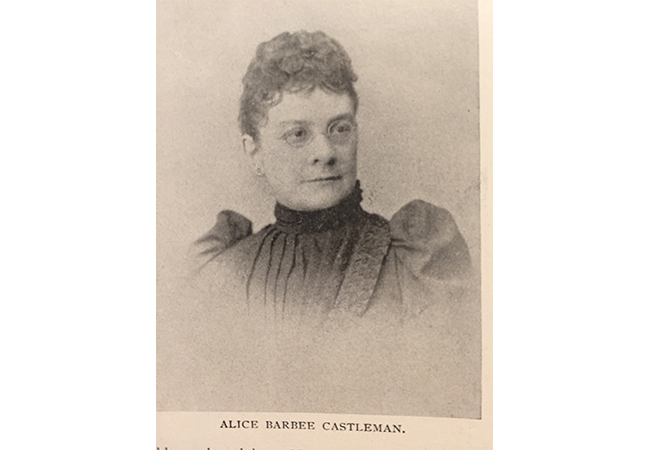 Across the country there is a growing movement to recognize noteworthy women and their historical contributions through public monuments. Unfortunately, less than 7% of the 5,193 monuments in the United States presently recognize women. We are about to change that statistic with the “Breaking the Bronze Ceiling” initiative. Each month TOPS will feature a Kentucky woman who impacted the Women’s Rights Movement. For more information visit breakingthebronzeceiling.com.

Alice Osmond Barbee was born at home at 6th and Walnut Streets in Louisville, Kentucky, in the early 1840s to John Barbee and Eliza Kane. John Barbee served as mayor from 1854-1855. Alice was the oldest of five children. Several of the male ancestors in the Barbee line served in the Revolutionary War, ultimately receiving land grants in “Western Virginia” which is now Kentucky. One such ancestor, William Barbee, was with George Washington on the night of the crossing of the Delaware. His brother Thomas Barbee, at 17, had an affair with a slave, producing a daughter, Lydia, who eventually married a Tuscarora Native American. Thomas married twice in his life, but had no more children. He stipulated in his will that Lydia and her children be free persons and educated, virtually unheard of at the time.

Alice Barbee was “educated in the East” before meeting her future husband. John Breckinridge Castleman hailed from Lexington, Kentucky, where he was studying pre-law at Transylvania University when the War Between the States broke out. He recruited 41 men to Knoxville, Tennessee and formed the 2nd Kentucky Cavalry under Confederate General John Hunt Morgan. Castleman opposed the institution of slavery, but advocated for states’ rights. He distinguished himself in the war, but was arrested, convicted of spying, and sentenced to death. This sentence was commuted to exile by President Abraham Lincoln. John then attended medical school in Paris, France where he also sought and received a pardon from President Andrew Johnson.

John returned to Kentucky in 1866, settling in Louisville on 60 acres of land known as “Schwartz’s Wood” which is now the western half of Tyler Park. He graduated with a law degree from the University of Louisville in 1868 and married Alice on November 24, 1868, in a double wedding with her sister Charlotte and John Galleher. According to the Courier-Journal, the event was “one of the most brilliant social affairs in the history of Louisville.” John would establish Barbee & Castleman Insurance Company with Alice’s father. Alice and John had five children over the next nine years, bred horses, and became social leaders and philanthropists. John achieved the rank of brigadier general in the 1898 Spanish-American War.

In 1890, Alice was a charter member of the Louisville Woman’s Club and elected its Vice-President in 1897. Other memberships and offices included Christ Church Cathedral, Women’s Auxiliary of the Board of Missions, National Board of Lady Managers of the Columbian Exposition, Filson Club, President of the Outdoor Art League, and Board of Directors of the Business Woman’s Club. Alice and John were members of the Louisville Suffrage Association, which would eventually morph into the League of Women Voters.

An 1893 book called A Woman of the Century included a profile of Alice. “Always on the alert to advance the cause of woman, she is progressive, cultured, and liberal in her views.” From 1910 to 1911, Alice served as the first Vice-President of the Kentucky Equal Rights Association. This position would lead to her attendance at the 1920 Democratic National Convention in San Francisco for the Presidential nomination of James Cox. She was quoted in The Sun and the New York Herald, “I’m so glad I could come. I think this to be the most important convention since the Civil War. Sometimes I’m tempted to say since 1776. We Democrats have so much to do if we are to frame a successful platform that will fulfill the needs of this after war (post World War I) period.” She was in her late seventies at the time.