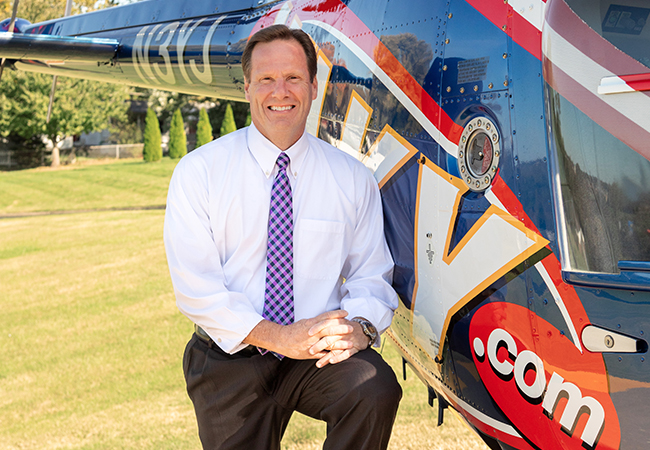 He rolls up his sleeves and he goes to work. And he’s serious about it. Jay Cardosi, WLKY TV’s Chief Meteorologist, embraces his job as the fulfillment of a lifelong dream he had at the age of six. How cool is that?

Jay Cardosi, WLKY TV’s Chief Meteorologist, embraces his job as the fulfillment of a lifelong dream he had at the age of six. How cool is that?

“I started in the business and learned the business at KETV in Omaha, Nebraska in 1990,” Cardosi said. “I trained under Jim Flowers, who became my mentor. He was a great forecaster and really good at his trade. More importantly, he always told me: ‘Only give the facts. Don’t hype; don’t hype for ratings.’ It’s the old ‘cry wolf’ element that eventually will turn people away. That lesson is at the forefront of how I would approach the job and what we do here in this office.

“But the first time I thought about weather as a career was when I was six years old.”

When you meet Jay, you experience an engagement, a genuine presence. He’s talking with you, not at you. What you see on television is what you see in person: a man determined to keep things in the moment and in perspective. Two critical characteristics in his line of work.

Back to the story.

“I was six years old, playing quarterback on my 11-man football team in the Kankakee Valley Football League, the East Side Bulldogs,” Cardosi said. “I’m about to take a snap from center and I see an unbelievable cloud formation and I said, ‘wow’, but the center thought I said ‘hike’. He snapped the ball, it hit me in the face and then a linebacker came in and just flattened me. I’m on the ground, the linebacker’s on top of me and I just blurted out, ‘I’m going to be a weatherman.’ He deadpanned, ‘you weirdo.’”

It’s not so weird when you take an interest in something at an early stage in life and act on it. Many of you will remember the annual grade school Science Fair event that wreaked havoc in every student and their household every year.

You guessed it, every year Jay would do something on the weather eventually winning the state Science Fair blue ribbon in the earth sciences category in the eighth grade.

He asked his parents a lot of questions about weather, about storms and how it all happens.

“My parents thought I was scared of the weather, but actually I was just fascinated by it,” he said. “I knew what I wanted to do in high school. For the rest of my life I knew I wanted to do the weather. My father told me then, ‘Jay, you go to college, get that degree and you’re going to do what you love to do and get paid to do it.

“I went to school at Iowa State University and earned my degree in Atmospheric Sciences. To take that degree and utilize it in forecasting takes a lot of work. In Omaha and here in Metro Louisville and our viewing area, those are two distinct places when you’re talking about the weather. And giving the viewers the best, most accurate forecast is what we try to do because it can make a big, big difference.”

That’s where the lessons learned from his mentor take over: only give the facts; don’t hype for ratings. In the WLKY weather office there are stacks of files of every forecast from every show they’ve done. All of their work backed by all the data at their disposal.

“We’ve got to be accurate and consistent with every forecast,” he said. “We work together to give our viewers all the information they need to be prepared, to be safe and to enjoy their lives.”

He married his high school sweetheart, Laura, just a few years after college. The young couple welcomed daughter Rachael into the world in November of 1994, daughter Madison in 1996 and son Nick in 1999.

But it was Rachael’s lagging early development and her diagnosis of Prader-Willi (PRAH-der WILL-ee) Syndrome that strengthened the family bond.

“Prader-Willi is a rare genetic syndrome and occurs in about one in fifteen-thousand births,” Jay said. “It affects the 15th chromosome and is kind of similar to Down Syndrome. When Laura and I found out what was going on with Rachael, we dug in and did what we had to do.

“The worst thing about the syndrome is that they don’t know when they’re full; they always feel like they’re starving and they will seek out food any way they can get it,” he explained. “Refrigerators, pantries, garbage cans, half-eaten doughnuts or chewed-up gum; they go after everything. You have to watch their food intake and because their appetite is so big, you have to watch for obesity, diabetes and all the complications that come with overeating.”

But the lessons Laura and Jay and their children have learned have been invaluable. And some of those lessons you can see in Jay’s work: the clarity, the diligence, the accuracy; but, above all, the care that goes into helping people prepare for what the weather offers. And in the Ohio Valley, conditions can go from benign to life-threatening in a matter of minutes.

“Rachael brought our family together,” Jay said. “Maddie and Nick, ever since they were in grade school and throughout high school, they acted so much older, more mature than their classmates. They helped care for her and see how important every life is.

“And what she’s done for Laura and me is incredible. Laura and I became incredibly close. About a month or two following the diagnosis we sat down with a glass of wine and Laura said, ‘God gave us Rachael for a reason. Because he knows that she’s going to be safe with us.’

“When she said that to me, it was like the heavens opened and a burden was lifted.”

The weather forecast pales in comparison, but his childhood dreams have been fulfilled and Jay Cardosi’s life has been blessed with grace. We’re fortunate to have him looking up at the sky and keeping us informed on  what’s to come.