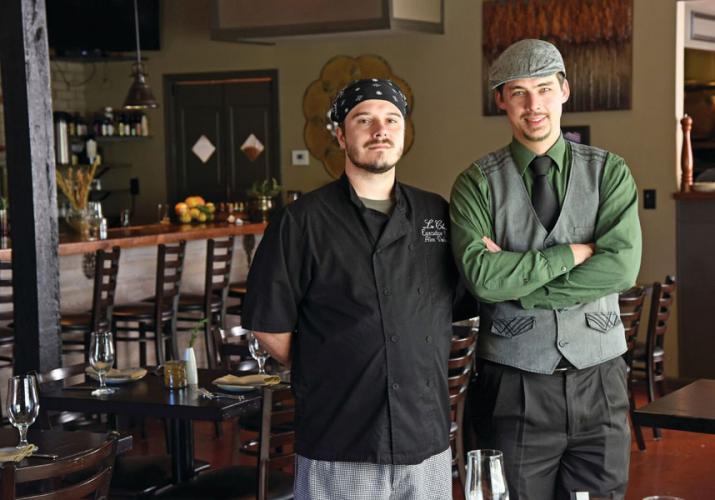 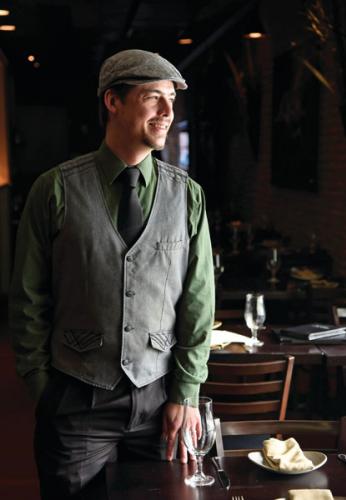 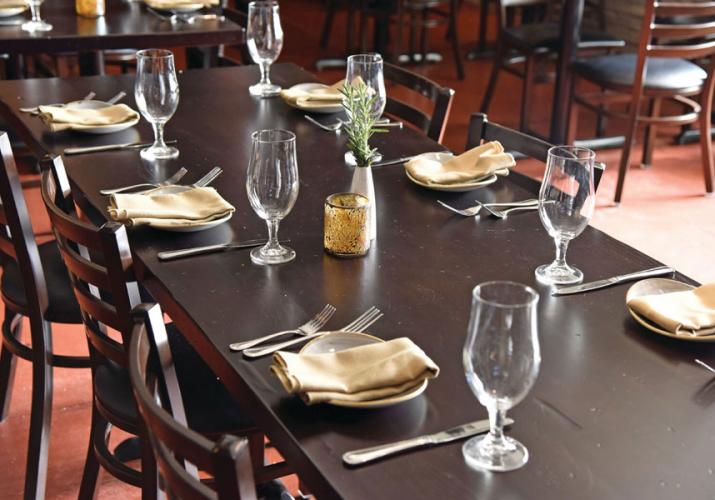 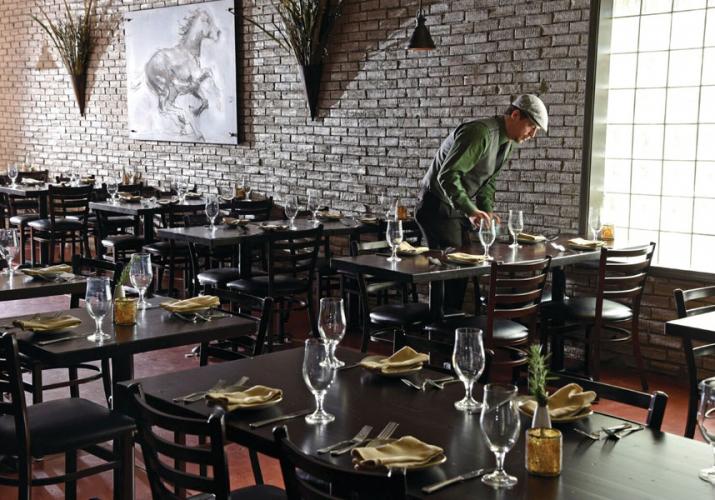 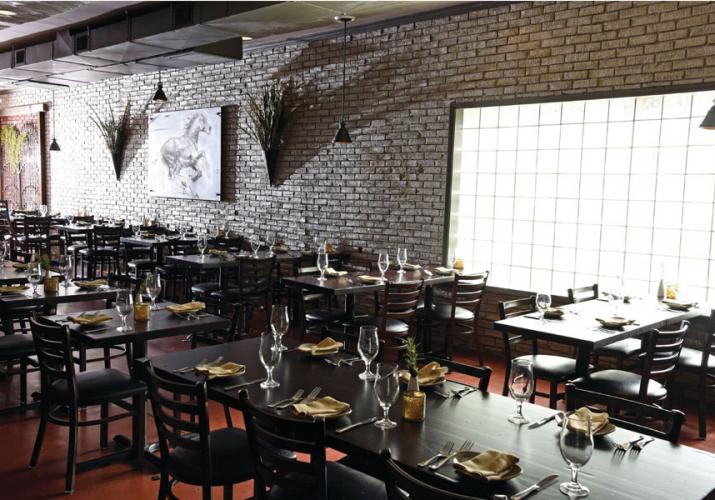 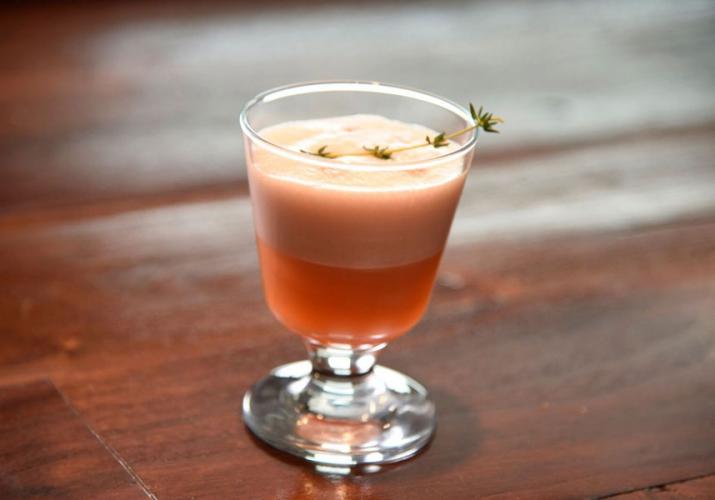 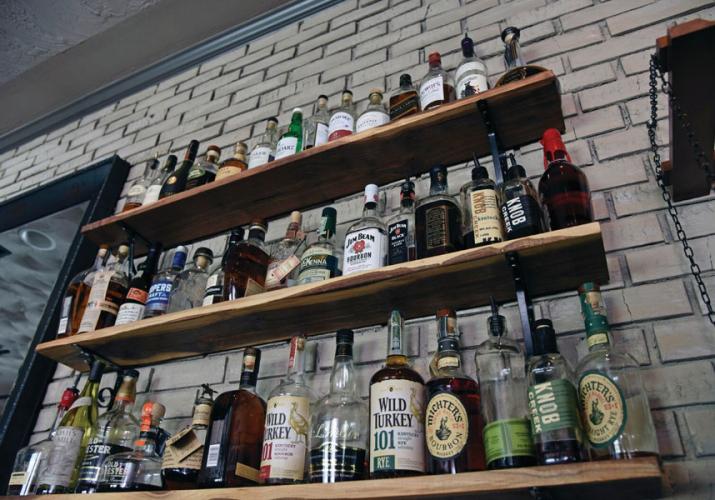 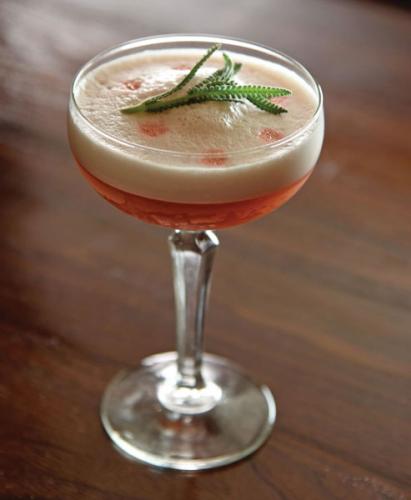 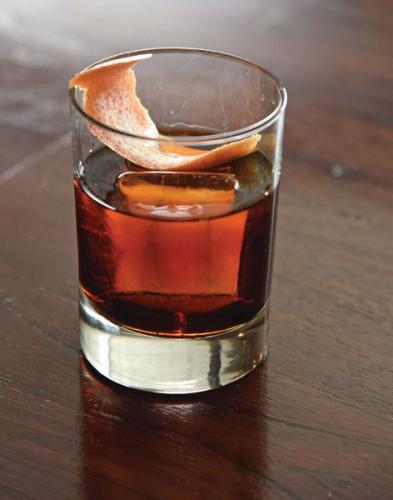 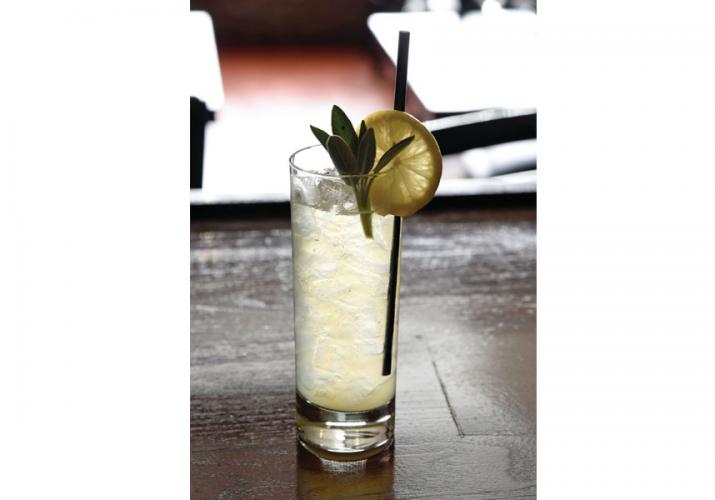 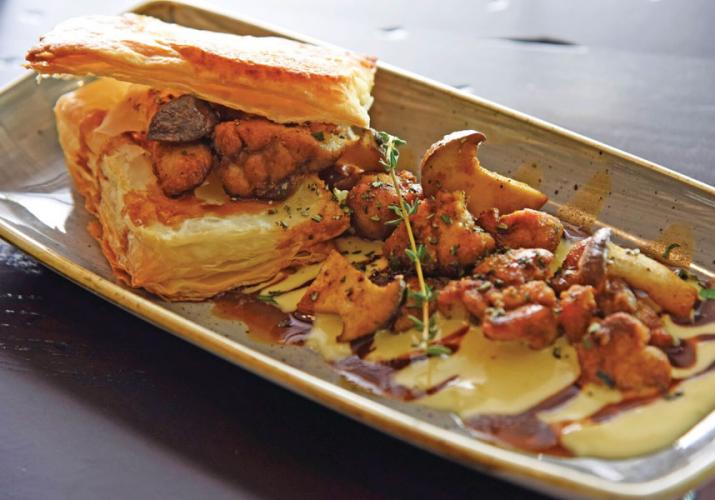 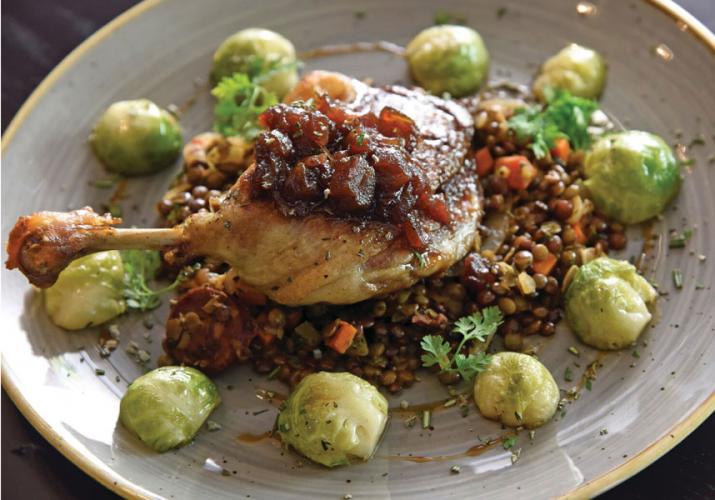 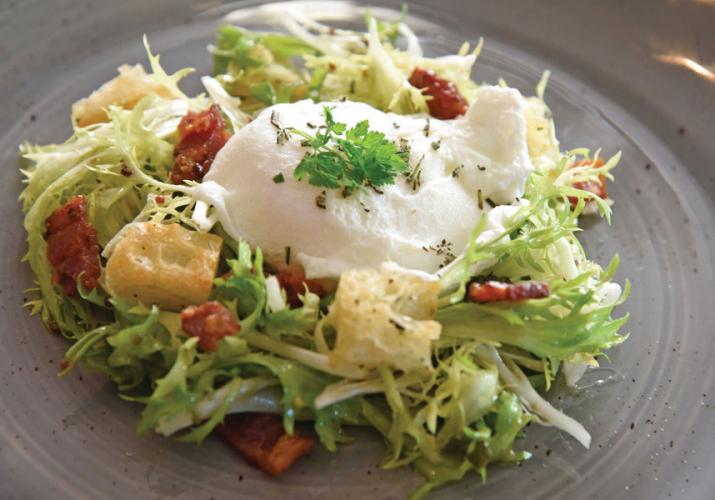 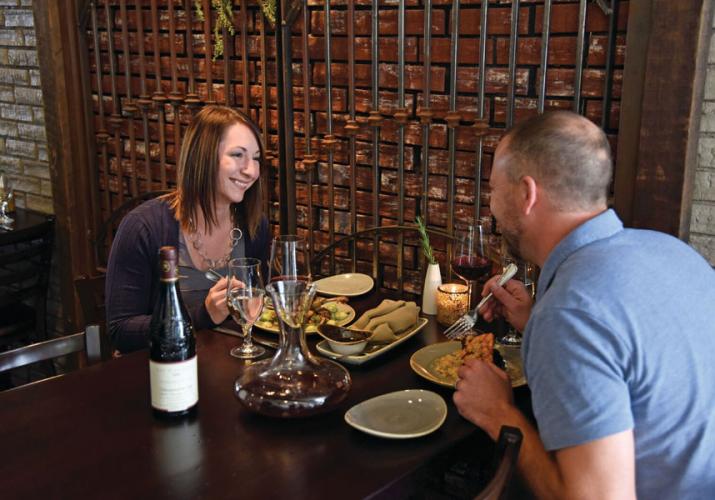 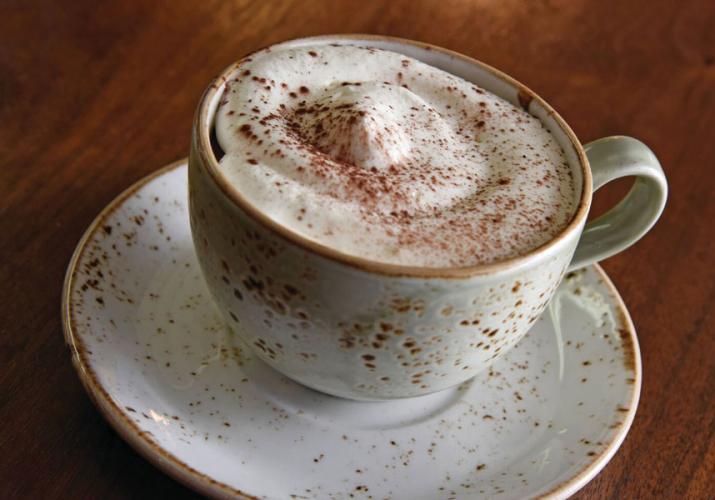 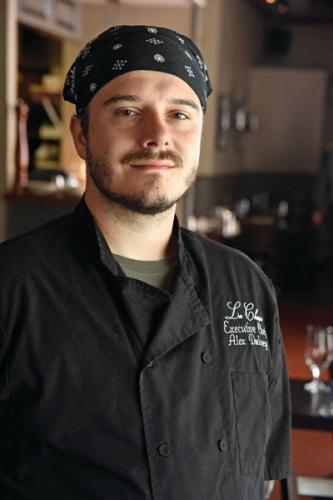 Isaac Fox paces around his neat, well-laid-out restaurant. It’s a little before noon on a weekday, hours before he’s due to open for dinner. But you can tell his energy is starting to kick in.

The phone rings and he jumps on it, with a carefully prepared, well-modulated, “This is La Chasse, how can I help you?”

Then a wrong number. You can’t win ’em all. He knows that, after years in the rigorous – often disappointing – restaurant business.

Still, when he talks about the origins of La Chasse, the Bardstown Road restaurant he opened in the fall of 2015 with Chef Alex Delaney, the excitement rises, in his voice and in his eyes.

La Chasse is a French phrase meaning “the chase” or “the hunt.” Delaney, trained at the Culinary Institute of America, had been the executive chef at Le Relais, Louisville’s finest fine-dining French restaurant. But that’s where the comparison ends.

This is a warm, rustic, cozy, informal restaurant – “not,” says Fox, “the haute cuisine, white-tablecloth look and feel normally associated with French food.”

“We want you to feel you’ve stepped out of Louisville and into French Provence, having the best wood-fired dinner you might have ever had,” says Fox. “Our grill is 100 percent wood-fired, which in and of itself is very unusual for a fine-dining restaurant. It’s what gives our foods such wonderful flavor.”

And odors. Even in the emptiness of midday, the memory of the food cooked on those wood fires wafts out of the open kitchen and around the room. It’s savory and compelling.

The menu is also a departure from people’s concepts of French food – high prices, small portions, cream sauces, heavy, fattening. That’s not remotely what Fox and Delaney were after.

As befits his background, Fox also manages the bar. (He tended and managed the bars at Basa, Volare and Jack Fry’s, among other places.) The long 18-seat bar offers a cocktail list of about 40 different selections, with some familiar names out of a different era – Sloe Gin Fizz, Kir Royale, Sazerac, Champagne Old Fashioned – and some whose unfamiliar names tickle the curiosity. Corpse Reviver #2.5. Loch Lomond in Winter. Cure for the Blues. The Chocolate Box. Smoke Without Mirrors.

Fox’s wine list was put together to accommodate not only expense account big spenders, but also guests who want and expect a good selection at affordable prices.

“People have become better-educated, they know there are great wines at all price points,” he says. “So we offer a wide range. We were never going to have a ‘cheap’ wine list, but there’s a sweet spot to me of $40-$60 a bottle. I’d rather sell that to you because you’ll come in more often and know you’ll get something you like.”

He says that during the last two or three Derbies where he was working, “it was nearly impossible to sell those super-expensive, cult Napa Valley cabs, even to the high-roller Derby crowd.”

But maybe that’s for the stuffy, white-tablecloth-type establishments, anyway. For a warm and comfortable joint selling peasant food, like La Chasse, the joy is not in a $300 bottle of Opus One. It’s in a good, flavorful, Bordeaux or Chablis to complement that fire-grilled chicken osso bucco with Fontina Weisenberger grits, or that coriander dry-rubbed ribeye with sautéed sage butternut squash.

As Fox said, think of an evening in Avignon, around a fire. Hearty eating. Plenty of wine and laughter. Provence in the Highlands.

WHAT WAS YOUR MOST MOMENTOUS RESTAURANT JOB?
Many, certainly. But when I was tending bar at the old Windsor Restaurant and Gardens in New Albany, I met Tenielle Allshouse, who was getting her culinary arts degree at Sullivan University. She became my wife – and mother to my five children.

WAS SHE INSTRUMENTAL IN YOUR STARTING LA CHASSE?
Yes. Even before we were married, we used to have these “let’s open our own restaurant” conversations. We sketched out menus and cocktail lists, just for fun, and played around with names.

HOW, AND WHY, DID YOU COME UP WITH THE NAME LA CHASSE?La Chasse means “the hunt,” which is the key to our food and concept. To Alex and me, the hunt relates to game: rabbit, venison, duck, elk, pheasant, which French country folk eat. Secondly, though, it’s also the hunt for fresh produce, as local, organic and best-quality as possible. And thirdly, it has a personal meaning: We both have a drive, a hunt for perfection, never to be satisfied with “okay,” always looking for ways to improve our craft.

TO YOU, WHAT DOES BEING A “GOOD BARTENDER” MEAN?
A “good” bartender is [a] a really big hospitality person; [b] very fast, keeping up with however demanding the volume becomes; [c] knows his regulars by their first names; and [d] is willing to listen to what his customers want and like, and to experiment.

MOST INFLUENTIAL BARTENDER YOU’VE WORKED WITH?
There were many, but Reina Shannon, who trained me at Basa, was legendary around here. She had a wonderful personality, connected to her customers and was also incredibly fast, accurate and knowledgeable. Plus, she was big into craft cocktails, which were growing in Louisville at the time.

DO YOU REMEMBER AN “AH-HA” MOMENT IN YOUR BARTENDING CAREER?
Steven Ton, the co-owner at Basa, was knowledgeable about cocktails and wine, and had a great palate. He sat down at the bar one night and ordered our specialty house Manhattan. I stirred it too long and it became watery. The next night, I tried not to stir it as long, and it was “too hot” – there was too much alcoholic heat. I hadn’t diluted it enough. About a week later, he proclaimed it “perfect!” And that was the compliment of the year for me.

HOW DO YOU RECOMMEND WINE TO A GUEST?
I ask and I listen, to help you out but not to show off. I’m not so interested in demonstrating my knowledge that I end up talking down to you. I won’t get into how much I know about how the vineyard slopes in the northern side of the Rhone Valley. Who wants to hear that? I’ll talk to you as long, and in as much detail, as you want to. And if you just want to order a wine, I’ll recommend something I think might be right for you so you can go back to hanging out with your friends.

WHAT DO YOU ASK THEM?

Three questions: [1] Do you want full-bodied, or something lighter? [2] Do you want an old world wine or a new world wine? Old world wines tend to be higher in acid, lower in alcohol, more earthy, less fruit-forward. And [3] Do you have a favorite brand or varietal? With those questions, I can usually bring them something they like without being snobbish or too much of a wine geek.

WHERE DO YOU GET THE WOOD FOR YOUR WOOD-FIRED OVEN?
We use a 50/50 blend of oak and cherry. I actually split the wood myself, out back every day. I grew up in the country. Splitting wood is my release.

ANY SPECIAL EVENTS PLANNED FOR LA CHASSE?
Yes. On February 13, we’re having a pre-Valentine’s Day wine dinner. We’re calling it an “aphrodisiac dinner.” We’re pairing five different wines with the kinds of items normally associated with love, like oysters, Champagne and chocolate. Also, we’re having a fund raiser for the Animal Care Society on February 27. And on March 27, a cocktail dinner with Maker’s Mark, creating five courses of cocktails that pair with five courses of food. We’ll create all the drinks – small cocktails, of course.