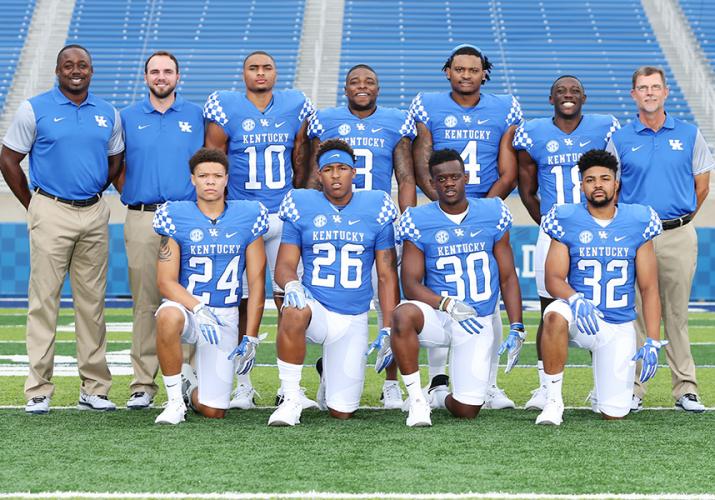 As you watch the UK running backs shuttle in and out of the games this season, you should know this: the best of them all isn’t wearing pads and a helmet, and he never will.
You may catch a glimpse of him on the sideline, or heading for a booth, high above the playing surface at Commonwealth Stadium. That’s him, dressed like a coach in a blue or white polo shirt, over khakis. And that same CWS field once upon a time was his personal playground. He is Moe Williams, and he is one of the all-time greats in Wildcat football history, come home to help.
“Just trying to give back and help the running backs wherever I can,” he said after a recent session at the new practice facility, which Williams dubbed better than anything he ever encountered in his 10-year pro career. “We didn’t have anything like this in the NFL,” he said. “Oh, my goodness. This facility is second to none. It’s unbelievable.”
It’s where he works now, as a graduate assistant coach, when he’s not going to school, finishing up work on his degree 22 years after an early departure from UK. Williams played at Kentucky from 1993 to ’95, leading the conference in rushing his junior year with exactly 1,600 yards – still a UK single-season record.
As a freshman he helped lead the Cats to a berth in the Peach Bowl, bursting onto the scene that year with a 70-yard touchdown run against Florida. “I remember it like it was yesterday,” he said. Williams recalls needing just one man to beat to the end zone and did it, he said, “on pure adrenaline.
I don’t think I was as fast as I was running that day. I was not going to let him catch me. It was awesome.”
Not many people did catch him, which is why he was able to skip his senior year and head for the NFL, where he spent 10 seasons, primarily with the Minnesota Vikings. After football he spent several years training thoroughbreds in Florida, eventually tiring of the daily grind. He decided to go back to school and lend his expertise, but he says it took a while before the current Wildcat runners accepted him.
“I think in the beginning they might have thought I was here just to pound my chest, not really here to help them,” he said. “I’m here to teach them the things that I’ve learned.”
Williams says he’s impressed with the talent level, “but it’s like what Coach Stoops has been talking about – what’s going to make a difference here at Kentucky is what’s above the shoulders. We’ve got the talent. It’s just a matter of if we can sustain the mental capacity to play in the SEC.”
Moe Williams could help the Wildcats to another bowl game and if he does, he just might pound his chest after all – with pride.